Don’t Blame Me, I Voted for Kodos

Posted on November 4, 2014 by Country Preacher 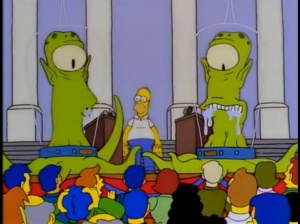 We visited Universal Studios recently. I pointed out that, with election day coming, they could make a fortune on shirts with that Simpsons quote. Or at least buttons. I’d have bought one, and worn it to the polling station. It expresses the futility of voting. Statisticians have pointed out that the likelihood of your vote making a difference in any race is vanishingly small. In Wyoming, it is laughable. The Incumbent senator leads his opponent by sixty points. (Not that he is going to get sixty percent of the vote – a truly significant margin. Rather, he is going to get sixty percent more of the vote than his opponent.)

Despite all those years of Republican “Pro-life” presidents, abortion remains the law of the land. Food stamp outlays continue to rise, even as real poverty shrinks. A government program, once enacted, almost never is withdrawn. Only in Washington can a failure to give the customary increase in the budget be considered a “draconian cut”.

And let’s actually look at the candidates available. I live in Wyoming – a state so red that, come election day, we don’t even describe the wide open sky as “blue”. For governor, we have the candidate that has appointed a NARAL lawyer to the Supreme Court, that has made clear he doesn’t want any gun-rights legislation coming across his desk, because he doesn’t want the political taint of veto (his friends in the legislature happily oblige), he quickly surrendered on gay marriage in the federal courts, despite assuring us that “personally he was opposed to gay marriage,” and most newsworthy, he got into an extended fight with the school superintendent over her plan not to have common core taught in schools. And then there’s the Democrat.

For the Senate we have the candidate whose sole proposed piece of major legislation would tax all internet sales. The only legislation he has sponsored that would protect any life at all is a plan to protect the sage grouse. (I’m sure the environmental lobby is thrilled.) While I’m sure he has said something about marriage as between a man and woman, his legislative record on the topic is bare. His sponsored legislation reads like a list of picayune government interests. And then there’s the Democrat.

It turns out that someone who gets their paycheck from the government has a strong interest in making sure the government keeps giving people paychecks. Any thought that the government might cut back on that practice somewhere else could affect their own someday. That’s a risk few are willing to take. The march of indecency and the destruction of the family continues unabated regardless of who I vote for. Abortion continues regardless of my vote – and in a country divided roughly 40-40 on the issue for the last almost half-century will likely never rise to the level of repeal. The church’s time is best spent not on get out the vote efforts, but on efforts to teach the Word of God to the people of God.

And yet, as a citizen also of the left-hand kingdom, I will go to the polls today. But when I go, I’m going to vote for the best candidate – even and especially when they aren’t listed on the ballot. Maybe my friend the auto mechanic would like a vote for governor. Perhaps the nice lady down at the bakery would like to try the Senate. They couldn’t do a worse job than the people already in office.