Posted on December 25, 2016 by Country Preacher

Putting the Mass in Christ-mass, we had Divine Service today. 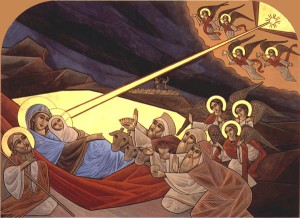 The Word was made flesh and dwelt among us. You can find parts of Holy Scripture that people will argue with more: Jesus wasn’t really born of a Virgin. The world wasn’t created in six days. The Resurrection didn’t really happen. But you won’t find a part of scripture that the world sees as more foolish. Silly, childish. Just obviously nonsense.

How can a word be brought to life. A wooden puppet we can at least understand. According to the movies, our toys have a life all their own. But a Word being brought into this world alive? That’s beyond superstition. It’s absurd.

Except the truth is far more absurd even than that. The Word wasn’t brought to life. The word already was alive. It was the Word that gave us life. The Word of God is God. He is not just something that comes from God’s mouth. He is God himself. Without Him, nothing was made that was made. He is the light of life. The life we have is only because it was given by the Word.

This – what can we call it but insane idea – is not just the imagining of John, who was looking for the perfect literary flourish to being his Gospel.

It is the reality. The one who spoke and it was is now enfleshed for us in the manger. Oddly, John doesn’t tell that story – the manger, shepherds, angels. He tells the birth of our Lord by going back to the creation itself. And yet, that isn’t the beginning of Jesus. Jesus is God from God light from light, very God of very God, begotten of the Father from eternity. There is no way to even speak of Father without Son. There was never a time without Son. Without Son, you can’t have Father.

And so, the eternal Son of the Father, the Word of God, is made flesh for us.

Philosophers have tried to dissect this section of John’s Gospel. To relate what John said to prevailing philosophical theories of the day. He was influenced, we are told, by the Stoics. This is an early Gnosticism.

Too many words. Too much thought. We can accept and understand this great mystery in no other way than by faith. And all the attempts to dig into this Divine Mystery only lead us to greater and greater mysteries.

It’s like trying to explain the internal combustion engine to a cow. It’s just beyond their ability. They know the truck brings the food. How that works doesn’t interest them in the slightest. But they gather when they hear the sound.

So for us. Three in one – you’ve already lost us. We can’t go there in our minds. Word made flesh – utter foolishness. Coequal and coeternal – God and Man in one person – we may as well just stand there chewing our cud. Because we these things are too great for us to understand.

So why does John say them? Because we don’t have to understand the details to know what it means. Piston rings and carburation mean only “Dinner time” to a cow. So “Word Made Flesh” means Salvation from sin.

That’s what John is saying here. He’s not at all concerned with ancient philosophy. He’s been given to say things. And so he says them. We are given to hear things. And so we hear them. They are too wonderful for us. And Yet, God in his mercy gives them anyone. And we rejoice at those words. Because we may not understand how it works. But we know what it means.

Adam and Eve wanted to be like God. But they wanted to do it. That’s not how it works. We are made to receive the gifts God gives. To praise his name. To follow his commandments. Adam and Eve thought that by going past that, by creating their own commands, that they could find their own promise. They could somehow achieve god on their own. It didn’t work. It couldn’t. We aren’t God. We can’t be God. The cow can stick it’s head in the driver’s window. But it can not drive the truck.

And Adam and Eve, in trying to be like God, ended the communion they had with God in the garden. It was not given to them to eat that tree. That tree did not bring godliness, it brought death. And now we are dead along with them. And so, in order to save us, God had to become one of us. Not like us. Not similar to us. Not looking like us. But actually one of us. If he only looks like us but isn’t, or is similar to us, then he can save people that look like us or are similar to us, but aren’t us. He needed to be one of us to save us. That’s why he was made flesh. The life of God himself is now dwelling among us. The life of God himself is that baby in Bethlehem. So he could save us.

The Word was with God in the beginning. This is heavenly talk. It conjures images of angels and eternal things. Of the powers of the universe.

Made flesh and dwelt among us – this is as earthly as you can get. The problem with Christmas isn’t that we get too caught up in the things of this world. The problem is we can’t comprehend how very earthly and worldly Christmas is. Because “caught up in the things of this world” is exactly what Jesus did. He got caught up in the material world for us. Too caught up. Getting as involved as he did could be dangerous. If he doesn’t watch out, it could kill him. Ahh – you see. He was so caught up in this world, that he died in it. God died. Turns out the word made flesh is not the most ridiculous thing in Scripture. God hanging on a cross and dying – is that even possible? People today still don’t get it. We never will. How can God be in heaven, reigning over all, and on earth, hanging on a tree lifeless? Those Christians aren’t just gullible, they’re a whole new level of foolish.

And then, we start talking about sin, and we go from foolish to offensive. But ultimately, we don’t care what the world thinks. The world did not receive him. We have no choice but to bow the knee, as we ponder the sacred mystery of God for us. He did not abandon his creation when we went astray. He doubled down. More than that – he put his own skin in the game. And now, we are honored more than the angels themselves. Not because of who we are. But because of who he is and what he became. The majestic six winged seraph – he didn’t become one of those. The great angelic host was passed over. The powerful stars – just the stuff of creation. The result of a word. We are the ones he formed with his own hands. You were knit together by him in your mother’s womb. And it was among us – as one like you – that he came into this world as one of us.

Now, we have salvation. We have redemption from sin. The world’s scorn means nothing. We have the almighty God as one of us. That it makes no sense only means we can not comprehend. It is a testimony to the majesty of the Divine Nature that it is beyond our understanding.

And we give thanks for that. We praise him for that, as surely as we praise him for bringing us the salvation. And we hear the word of our Savior, and we give thanks. And we gather. And we receive the gift. “Take eat. This is my body. Take drink. The new testament in my blood.” How is that even possible? How can the stuff of this world – baked and produced by human hands – give us the Divine Things? Good question. How can this physical stuff contain God? It happened in the manger. It happens here at the altar. And we don’t need to know how it works to know what it means.

It means forgiveness. It means salvation. It means life, given by the one who is life. Who joined himself inseparably to our lives. On this great day we don’t need to know how to know what.

Glory be to God on high, and on earth peace, goodwill toward men. Not peace among ourselves. But at peace with God. And God showing his good will to us in the Savior. The word made flesh – a mystery beyond comprehension.

Jesus, born to die for your sins. That’s enough. It’s everything.