Posted on December 25, 2016 by Country Preacher 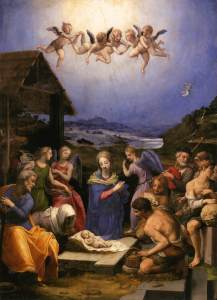 In case you missed it – which you shouldn’t do. Good news – another service tomorrow morning at 9. We’ll see you there!

Tonight we celebrate the birth of the Savior in Bethlehem. A joyful occasion. But it’s sort of a quiet, reflective joy. Not like Easter – the resurrection of our Lord. That’s a big party. Grand procession, The cry of Hallelujah, and “He is Risen, He is Risen indeed!” That’s not tonight. Tonight is a quieter joy. But then, the birth of a baby is usually a time for quiet joy. The anticipation, the last few weeks of waiting, the difficulty of the delivery. That’s all like the build up to Christmas. Crazed excitement, busy schedules, will it all be ready in time. And just like the birth of a baby, after the baby is born, Mother – exhausted, father quietly proud. Nowadays they take a selfie of the trio to post on Facebook. A time of joy to be sure – mother and child safely through the danger. But a quiet joy. If possible, a restful one. So also for Christmas. The soft glow of candles, the Silent Night, the gently falling snow in the background – or at least falling snow in our mind’s eye. That’s the image of Christmas. We quietly reflect on our Savior’s birth. Big deal – you bet. But not big party when you get there. We’ve had those at our workplaces, schools, wherever. But at this point, the course is set. If you aren’t ready now, you’re not going to make it. Just coast through, and then, rest until the New Year.

That’s how it would have been the first Christmas. Heading to Bethlehem for the census. Town full. Baby coming – Now. No room. Manger as backup. And finally, rest. Treasuring all these things, and pondering in her heart. So we ponder the birth of the king.

And into this quiet celebration shepherds suddenly appear. Not the mayor, or the governor. Not important officials. The shepherds. They’d been out on the hillside during lambing season. Good thing Mary and Joseph were in an informal room, not the fancy parlor. They come knocking, asking about the king.

Turns out their quiet night of work was interrupted. The skies split open. The shepherds cowered in fear. The angels – good news, not judgment. Savior! And then song. “Gloria in excelsis Deo!” Glory to God in the highest! And on earth, peace. And goodwill toward men.

It was a quiet, reflective night. Now mayhem. Crazed shepherds, Loud songs. Whooping and hollering. We really wanted a quiet peaceful; family evening. But not to be. The Little Lord Jesus may not cry, asleep on that hay. But the angels burst from heaven to earth. They will not be silenced, because this is just too amazing.

You could almost make a comedy sketch about what happened in heaven that night. I want you to take the entire angelic choir down to earth to announce the birth of the king. No, not to the Imperial Capital at Rome. No, not to King Herod. No, not to the priests. There’s some shepherds just outside of a little town. They’re in the middle of a long night of work. Let’s give them something nice.

God doesn’t pick the mighty, the powerful. If Jesus had been born in a palace as he deserved, surrounded by attendants, his every whim catered to, then we might celebrate the time God came to earth, and reflect that we had better be wealthy and powerful if we wanted any of his attention.

Jesus didn’t come that way. A poor family. He doesn’t have his own cradle that evening. He’s wrapped in swaddling cloths – another way of saying old rags. His Mother a young girl, used to hard work. His father a tradesman, but not a wealthy one. His own disciples would have better connections, better economic prospects than he had.

And so, the first to hear are not Caesar Augustus, or Quirinius the governor of Syria. It was shepherds, out doing their job. In fancy theological language “fulfilling their vocations” – their calling. God exalts them with the angelic visit. That’s the only majestic thing about this story. Nothing about it is grand and glorious, until we get to the shepherds, and the angels. That they appear to the shepherds tells us a lot about what this new baby – the God Man Jesus – came to do. Not to rule, but to serve. He came for the common people. Those who aren’t wealthy or powerful. Those who just take care of their families, hear the Word of the Lord, receive the gift of salvation in Christ’s Holy Church, and go quietly and humbly on their way. That’s the sort of people Mary and Joseph were. The sort of people the Shepherds were. Not the glorious important people, but the common everyday folk. Saint Paul says, “Not many of you were wise, not many were powerful, not many of noble birth.” The Savior comes humbly, because he has come to serve us. Not by giving us this or that little trinket. Not by fulfilling our every wish, as if he were Jiminy Cricket and our faith was nothing more than wishing upon a star. No, Jesus gives something much more real than that. He gives life.

But we’re already alive. No. We aren’t. We’re dead in our trespasses. Not only condemned for eternity in hell. But condemned to spend our lives chasing after the winds of power and wealth. health and beauty – things that ultimately fail us. He is the one who comes so that we would have life now. A life where we aren’t chasing after the wind. Where we can seek the kingdom of God and his righteousness. Where we can receive the gift of forgiveness in His Holy Church, and then, in humble service to our fellow man, go out and live joyfully forgiven lives. We have the humble surroundings of Christmas to show that this grace is ours. It isn’t just for those who can afford it, or who can offer something really cool to God – there’s nothing we can offer God that he hasn’t already given us first – even up to and including our lives. And Jesus birth makes clear that he is the savior of all – not just the mighty. Humble circumstances. Because he comes in humility.

And then we have the angels to break through the ordinary – to show us that this is not just business as usual. Not just another baby born somewhere. Not just another life that doesn’t really matter in the great big scheme of things. This changes everything. This night when all is still, when we quietly reflect, we know that everything is changing. The angels break through from heaven to earth, and we join them in our song, singing praise to God on high. And knowing that, when we gather tomorrow to receive the body and blood of Christ in the Holy Supper, we are being joined to eternal things. We’ve got not only the birth of the king in the manger to ponder. We’ve got the eternal splendor of the majesty of God, going to cross for our salvation. Our lives have meaning. They are given meaning by the little Lord Jesus asleep on the hay. That’s enough to ponder for a thousand lifetimes. And it gives us enough opportunity to praise that we could spend eternity around the throne of God and the Lamb with those angels, singing our songs with them, and never run out of something to say.

In fact, that’s just what we are promised will be. Thanks be to God, who came into the world as a baby, to save us from our sins.