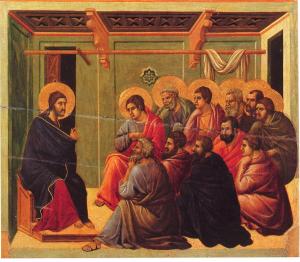 The sermon isn’t Mother’s Day themed – Mother’s Day not being a church festival. We did give thanks for faithful Christian mothers in the prayers, because we love giving thanks to God for his many gifts, and throughout the year we try to name as many as we can. But sermon time is Gospel reading time. And this week the Gospel is Jesus promising the Comforter. We need comforting, so this is an excellent Gospel reading.

We pray that our hearts may be fixed where true joys are found. Jesus tells the disciples that sorrow has filled their hearts. Big difference between the two. We pray for Joy. The disciples are filled with sorrow. So what is the difference between the joy that we pray for, and the sorrow that Jesus sees? The word of Jesus. It’s the Word of Jesus that brings joy to our hearts. But it’s also the word of Jesus that brings sorrow to the disciples. Jesus is going away. We understand good bye. We know that it’s a moment for sorrow. And Jesus isn’t just going to Galilee, or Rome, or Denver. Jesus is going into death. The big goodbye. This is it. And, even after he is raised from the dead, there will only be 40 more days. Then he will ascend to his father. We don’t get to see him as the disciples did. They knew him face to face. They loved him. And now, he will be gone for the rest of their lives. We know what that is like as well. It’s a time of great sorrow.

But Jesus doesn’t tell them this so that they will be filled with sorrow. He tells them this so they will be comforted. He even promises to send the Comforter. That’s what Jesus calls the Holy Spirit. The Helper or Comforter. Jesus doesn’t want them to be filled with sorrow. He wants them to receive the peace that the Comforter, the Holy Spirit, brings. He wants them to have joy.

If you have a bucket filled with water, it is weighed down. That’s what sorrow does. It weighs down our hearts. You can actually feel the heaviness. But Jesus came to lift that burden. To remove the weight of sorrow. And yet, his words only cause more sorrow. That’s because Jesus is telling the disciples this before the crucifixion. Before they understood all that would happen.

From the human point of view, Jesus was a good man, who said good things, and then was betrayed and killed. That certainly was a sad thing. But that’s all there was – from a human point of view. And it’s definitely a was. No now. No after. It’s over, because he died.

But the Gospels make clear that the death of Jesus was the beginning. He was raised from the dead, and now lives – continues to live. That is a joyful message, but the disciples can not receive it on the other side of the death and resurrection. No matter how clearly he tells them, they don’t understand. And, so, when he says, “I have to go away” they only understand it from a human point of view. And that means they are weighed down with sorrow – their hearts are filled with it.

But Jesus offers them a word of Comfort. He knows that there will be sorrow now. But, once he has been raised from the dead, there will be joy. Joy that no one can take from them. Jesus takes the burden of their sorrow to the cross. He takes the weight of their pain and suffering with him. Just as he takes their sin to the cross, and that sin is swallowed up in death. It can not be raised. The disciples are sorrowful. But that sorrow will turn to joy, and no one will take the joy from them. Because Jesus has now been raised. And that resurrection, and his coming ascension, make room for the comforter. The one who will help us in this world.

Even today, we have sorrow at times of death. Our hearts are heavy, because we must say goodbye in this world – for the rest of our lives. We don’t get to see them again here. But we know the resurrection is coming. There will be a time when all of this is passed. When we will say goodbye to the sorrow, where resurrection will be given to all who believe in Jesus name. And then, the joy that is mixed with sorrow here, will be joy un-sorrowed, joy unending.

The work of the Comforter is to bring us to faith in the promise, so that we would not be sorrowful in this world. So that our weeping would not be the weeping of those who have no hope. But rather that we would be comforted in our sorrow by the one who is the comforter, the holy Spirit, who brings us the promise of resurrection and life eternal for Jesus sake.

Jesus says that the Holy Spirit will convict the world three ways.

First, he will convict the world regarding sin. The world rejects the forgiveness Jesus gives. True, Jesus died for the sins of the whole world. But we still have the ability to reject that forgiveness, and to try and stand on the day of judgment based on our own merits. That’s not a good thing. Even our good works are as filthy rags. For those who try to stand on their own, the day of judgment – a day of resurrection joy for those who look to Jesus for their salvation – that day will be a day of unending sorrow for those who would stand on their own merits before God. The burden of their sin will be given them again. Their guilt will be counted against them. And so, the Holy Spirit convicts the world of sin, because they do not believe that Jesus is the Son of God, and Savior of the world.

And the world is convicted of judgment, because the ruler of this world has been judged. Satan, the great accuser, who accuses the brethren night and day before the Lord, has been thrown down. His time is short, he has been mortally wounded, crushed under the heal of our Risen savior. And yet, the world refuses to call evil evil. It refuses to reject his rebellion against God. And so the world is convicted of judgment.

And yet these words are not words that bring us sorrow. Jesus speaks these words so that we would be comforted. So that we would be helped. Because in this world, we are often weighed down with sorrow. Our hearts are heavy, because we sin daily, and constantly need the forgiveness Jesus offers. Our conscience accuses us of rejecting the word and command of God. And yet, the grace and mercy of Jesus is greater than the condemnation of our sin. Jesus has ascended to the Father. He is the righteous one. And he has all authority in heaven and earth – he can forgive sins. He does forgive sins. And he gives to his church on earth not only the authority to forgive sins – but also the responsibility to do it. TO forgive sins in his name. And he has promised that sins forgiven in this world by his pastors in the church, are forgiven in heaven before his Father.  Jesus work is pleasing to our heavenly Father. Jesus paid the debt, he takes the sin away. Your conscience is now at peace, and your sorrow is placed on him, and replaced with joy. That’s not always obvious in this world. The disciples didn’t understand, until after Jesus was raised and the Spirit was given to them.

Satan still tries to get us to walk away from the grace and mercy of God. To disbelieve, to reject the forgiveness of sins. That is why we need the Spirit, the comforter, the helper. To bring us to faith, to renew a right spirit within us, that we would receive the promise with joy and thanksgiving.

Grant this Lord unto us all.

This entry was posted in Sermons, Uncategorized. Bookmark the permalink.