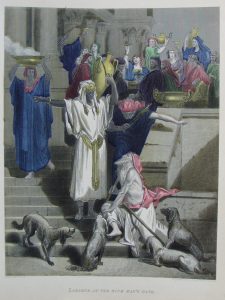 Faith bears fruit. A sermon about that.

God created mankind for a specific purpose. So that we would look to him for every good thing, and so that we could help our neighbor in every need.

We’ve covered in detail the life of Christ – the redemption from sin. Starting with his birth, we’ve followed through his life, death, resurrection and ascension. We’ve heard how he died on the cross to save us from our sins.

And now, in the season of Trinity, we look at the life of the Christian – how we respond to this good news of Jesus death and resurrection for our salvation. What we as the people of God are to do with our time and efforts, now that we have been made children of God through the washing of water and the word in Holy Baptism.

We start off pretty abruptly. Lazarus and the rich man. Take care of your neighbor – fulfill the fifth commandment that we should not hurt nor harm our neighbor in his body but help and befriend him in every physical need. That’s the message that comes through loud and clear. The Rich man did not help Lazarus – not even the crumbs that fell from the rich mans table. And the rich man ends up in eternal torment. He did not use his time and efforts – to say nothing of his money – for the good of his neighbor. He turned away from God and His Holy Word, and inwards to his own selfish desires. And so, he is abandoned by God. His name isn’t even mentioned. But then, that’s the norm for parables. In fact Lazarus is the only one ever named in a parable. His name means “God helps”. His life didn’t look that way. In life he was just dumped at the man’s gate, pathetically begging for crumbs.

In Lent we hear of the woman who refuses to go away. The foreigner of great faith who is turned away with “It is not right to give the children’s food to the dogs” and responds with “yet even the dogs eat the crumbs that fall from the master’s table.” Lazarus was hoping for those crumbs. But the rich man doesn’t even give that. Instead, it is the dogs who show him pity; licking his sores.

This isn’t a parable against wealth. And it isn’t a parable in favor of works. The deciding factor is that the rich man did not hear Moses and the prophets, and neither do his brothers. It is a parable of faith. But faith has consequences. It has fruits.

There’s a lot of talk about income inequality. But today, a machine can create wealth. In Jesus day, you were limited. How much you could mine from the ground depended on how much a person could physically dig out of the earth. How much you could farm depended on how much your oxen could physically drag a plow. There was a limit to productivity, and so there was a limit to wealth. The rich man having so much meant that it had to be at the expense of others. Yes, we have greater income inequality today – because there is no longer a theoretical limit to how much can be produced. So, there is no limit to the wealth that can be acquired. In Jesus day, as it was for almost all of human history, that limit is based on how much work a man can do in a day. He didn’t get rich inventing new more efficient fidget spinner. He got rich taking the food others had produced and calling it his own.

And with that wealth he bought clothes, the best foods, all the good things that life has to offer. What he didn’t do was look around at his neighbor in need. It didn’t even occur to him that what he had been given was to be used to help others. He thought his business was wealth and power, but mankind should have been his business.

But that’s what his wealth was supposed to be for. As with anything we are given –it is only given to us by God as a gift, so that we can use it  to praise God, to support the work of the Gospel. And to help our neighbor.

But, as the lawyer asks – who is our neighbor. A neighbor is anyone God has placed in our life that we can help. There are neighbors all around in our community, in your family. God puts us in certain stations and places in life, and would have us fulfill those callings. Whether it is as a child to obey and honor and respect parents as long as they live. Or whether it is as husband or wife, loving and honoring a spouse till death do us part. Or whether it is as father or mother, caring for children in a family, raising them in the fear and knowledge of the Lord. Or whether it is as a citizen of this nation and state, or of some other nation or place, living honestly and faithfully where God has placed us, and attending to our calling. It doesn’t matter where we are, what we are doing – God has called us to love him and serve our neighbor. That’s the word we hear in Moses and the prophets, that’s the word we hear from Jesus in the Gospels, and from the Apostles in their writings.

And the rich man is not interested in that word until it is too late. He waits until after the appointed judgement to try and work his way to salvation. But there is no salvation for those who die condemned. It is too late. And his plea that Abraham send Lazarus to at least warn his brothers falls on ears that are as deaf to his cries, as he was to Lazarus.

The odd thing about this parable is how specific it is about the poor man. The rich man is just a rich man. The poor man isn’t a poor man. He is Lazarus – the one whom God helps. And there is a Lazarus in scripture – though not in Luke’s Gospel. But in John we hear that Lazarus was the great friend of Jesus. His sisters Mary and Martha send word to Jesus to come and heal him. But it is too late he has already died. After four days of dead, Jesus raises him from the grave. Now, that’s certainly a great miracle. But the amazing thing is that the leaders of the people still don’t believe that Jesus is the Christ – they not only plot to kill Jesus, they even plot to kill Lazarus (again) in order to silence the crowds. Which is to say, they did not believe even when someone rose from the dead – and that’s just what Abraham tells the rich man. Even if Lazarus were to go back, if the rich’s man’s brothers will not listen to the Word of God when it comes from the mouth of the prophet, they will not hear it even if it is spoken by one who is raised from the dead.

In John’s Gospel, Lazarus resurrection is just a prelude. Jesus resurrection is coming. And for Jesus, there is no wonder-worker standing outside his tomb telling him to come out. Lazarus had Jesus calling him forth. But for Jesus, the wonder-worker had died. He cried out in a loud voice and gave up his spirit. He was placed in the tomb. Physician heal thyself – possible. Dead man, raise thyself. Not possible. And yet, Jesus does exactly that. He is raised from the dead by the glory of God the Father. Death itself is undone by this one. Because there was no powerful voice outside the tomb calling him out. Jesus is raised because death can not hold him. It’s power is broken. So much so that at the end, there will be a resurrection of the dead. All those who hear the word of God, who believe that word, who grab hold of the promise by faith will be given life. And that new life is a life turned outward to God and neighbor, not turned inward to self. To repent of sin is to turn away. But it is also to turn toward the things of God. To leave behind the self-interest, and self centeredness of the old Adam that seeks only personal gratification. And to receive the word of God that would seek the kingdom of God, that would show godly love to a neighbor.

Not that we are saved by the works we do. But rather, the faith God gives produces fruit in our lives even in this world. That we no longer cling to our own self-interest, but we receive the gifts God gives in worship, that we are forgiven our sins, trust that for Jesus sake they are taken away, and that we serve our neighbor as we attend to our calling.

In Jesus name and for his sake, may God grant it.

This entry was posted in Sermons. Bookmark the permalink.