Posted on September 14, 2017 by Country Preacher 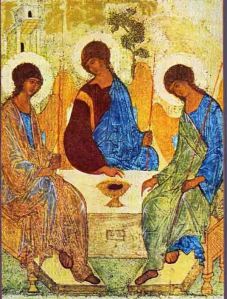 I don’t usually post these (because they usually aren’t in manuscript format), but here is the sermon from tonight’s midweeks service. Explaining the Epistle reading from Sunday, Galatians 3:15-22. That’s a lesson that needs some explanation.

Some sections of scripture just flow from the tongue. They form beautiful word pictures in our mind that are easy to grab hold of and remember. “The Lord is my shepherd…” “I am the Light of the world…” “You shall not kill” We teach them to children, we remember them our whole lives.

And the Epistle reading this evening is not among them. It is densely packed with wonderful things. But it takes a bit of unpacking to follow what Paul is saying. It’s not easy. But it is worthwhile.

Paul is writing to the Galatians. And they had problems. Big problems. Galatians is the only epistle of Paul where he doesn’t start by “giving thanks” to God for them. Instead, he gets right to it – I am astonished that you are so quickly deserting him who called you…” And he starts chapter 3 – where our reading is from – with “foolish Galatians who has bewitched you!”  The problem was that they actually abandoning the Gospel. They were turning their back on the gift of forgiveness and chasing after the idol of their own works. How? They were listening to teachers who were saying that to be a Christian, you had to make a stop in Judaism first – get circumcised and then you can be baptized and be a Christian. The Law still applies they said. Not just the law of the Ten Commandments – the Moral Law. But also the ceremonial law – the system of sacrifices, the circumcision of the flesh, the dietary laws, all of that is still in force.

No, says Paul, the Law does not, can not save. And if we turn to the Law to be saved, we will not be saved. That’s where our Gospel reading picks up.

With a covenant, Paul says, no one annuls it or adds to it once it has been ratified. That’s contract language. He uses the example of a contract. If you sign a contract to get your roof repaired for such and such an amount, the roofer can’t come back later and say, we need the money, and your car as well. You owe us that in payment. And you can’t say, “Repair the roof, and then fix the sidewalk as well. You can negotiate those things before the contract is signed. But once it’s signed, that’s it. You abide by that contract.

Now, that’s the exact same argument the Judaizers – the circumcision group – was making. But Paul goes back before circumcision. Abraham was righteous not because he was circumcised, but because he believed God. That’s a direct quote from Genesis. “Abraham believed God, and it was credited to him as righteousness.” And the promise was that through Abraham all nations of the earth would be blessed. Not that through circumcision all nations of the earth would be blessed. But through the offspring – singular referring to Jesus. Not offsprings – plural referring to the Jewish nation and circumcision. Offspring – will bring the blessing. That’s Jesus. He brings the blessing through his obedience to God, and through his suffering and death on the cross.

And that promise was made to Abraham 430 years before the Law was given at Sinai. The promise came first. So, the Law of Moses, given 430 years later, and including the sacrifices in the temple, and dietary laws, and so on, can not annul the promise. The promise is still good.

So, what does the Law do? Paul says, it was added because of transgressions. Adam and Eve had the law written on their hearts. All humanity does. We call it the conscience. It tells us not to murder, or steal, that husbands and wives need to be faithful to each other, that children obey parents, and so on. Those sorts of laws form the basis of every civilization on earth – Christian or not. Adam and Eve knew not to murder, commit adultery. But those laws were not written down. They delighted in the law of God.

Until they ate the forbidden fruit and sinned. Now, sin entered the world. It’s like with a parent. If the kids are behaving themselves, then no new rule is needed. But, if all of a sudden they start taking the milk outside and pouring it on the pavement, the parent says “Don’t take the milk and pour it on the pavement.” It was understood not to do it before, until someone did it. Then a rule is made. So also, the law was written on our hearts. And for Adam and Eve, they rejoiced in that law of God before they sinned. So there was no need for more.

But after that sin, when the world was corrupted, and sin and death ruled, and every inclination of man’s heart was always for evil all of the time, then God wrote the Law down. The Ten Commandments were given. Paul says, “Is the Law contrary to the promise of God? Certainly not!… The scripture imprisoned everything under sin…” The Law was written down to imprison – which was not the reason God wrote it on the hearts of Adam and Eve. But after sin entered the world, then the Law condemns. And the Ten Commandments, given on Sinai, were given to imprison all sin under the Law. Now, righteousness can not be by following the Law, as it was when Adam and Eve were in the Garden and delighted in the law of God. Now, the only way to obtain righteousness is by the work of Jesus on our behalf. And that’s how Paul ends here – “so that the promise by faith in Jesus Christ might be given to those who believe.” Forgiveness, the Gospel, is the free gift for all those who believe. Jesus did the work – we can’t work for it. If we try, we lose the salvation. That’s why Jesus saves us. His life is our salvation. His death is our life.