Posted on September 22, 2022 by Country Preacher 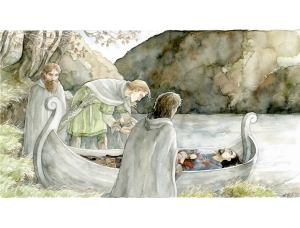 The most watched event in television history is a liturgical Christian funeral. The Queen’s funeral showed how nonsensical it is to complain about ceremony, or riff on funerals being too depressing. Four Billion people watched as a commonwealth honored her departed queen and laid her to rest. We should learn from that example, but her example is outside the mainstream. Not many serve as sovereign of so many nations. Not many serve so lofty or so long. Not many have the resources for such a grand affair.

That’s why my mind turned to a much more humble funeral. It was an imaginary one, but it has also been seen (in a sense) by many millions. It is Boromir’s in Tolkein’s The Two Towers. I ponder it because it was not planned over the course of many years. It was known only to three. It had to be fast, and of necessity, it was a river funeral rather than a burial.

What amazes me about it was that it was a funeral at all. No one would have blamed any of the three had they shouted, “There’s no time for a funeral!” and run off into the woods in pursuit of their enemies. The orcs had captured at least two hobbits. They only have about a 15 minute head start at this point. Aragorn, Legolas, and Gimli could run after them and have a hope of catching up. It is not a large hope, and it likely would have ended in death had they succeeded. But their eventual quest is more hopeless: hours behind, stretching to days. As far as they know, the end will find the two in an impregnable tower. They will never so much as gain entrance, to say nothing of recovering friends.

The delay is caused by Boromir’s funeral. They have no shovels to dig. So they take the body to the river, place him in the boat with his sword at hand and the weapons of his fallen enemies at his feet. Then they paddle into the river to make sure it goes over the falls. As it does, appropriate Eulogies are spoken. Only when this is done do they return upriver and move on.

There is no thought of making a decision before their comrade’s remains are properly seen to. Honoring the dead was necessary for them.

How different things are in our own day. Funerals are delayed weeks or months until there is favorable weather or until airline tickets are cheap enough for Aunt Marge to fly in from the coast. And this assumes there is a funeral at all. Many are foregoing a funeral. Cremation and a box in a closet are all that await them.

The Church has always honored her dead. And (until recently) has never cremated them. The body of the departed was redeemed by Christ Jesus through his own bodily death and resurrection. The remains are therefore treated with honor. Cremation arises from pagan rites, which do not value the gift of creation or of the body. Modern cremation involves not only burning, but then grinding the bones. No matter how you think about it, it is not a respectful end.

Some will say, “Do what you want. I’m not there anymore.” True, the soul has separated from the body. But the body was something. No battle is fought now in Gettysburg. But we would not think of digging up the battlefield or cemetery to make it an amusement park. It is, as a wise man said, “hallowed ground”, and we can neither add nor detract from that. To attempt it would be to desecrate it. The tomb of the unknowns is the place of highest ceremony in our nation. The bodies rest there and are honored because they gave even their identity in service to something greater than themselves.

I understand how we arrived where we are. It was not a financial matter – although now that cremation is ubiquitous and accepted, it often is. It has become no more important than the debate between a regular or luxury car. It rests entirely on what the family can afford or is willing to pay. But there is much more at stake. And for this, Tolkein is a help to us.

He fought in the war to end all wars. Bodies were stacked like cordwood. The war after that incinerated and blasted them into such particles that many were never found. Early in my ministry, when the fighters from that war were still with us, many spoke of how they were planning cremation for themselves. Their own friends and comrades were not killed so much as obliterated from the earth. It was, in a sense, a way of honoring them. If the Lord promised to raise their bodies which were lost, so also their brothers would join them in death and destruction, with the hope of renewal and resurrection.

It was rarely said this explicitly. But it was made clear this was the intent and the desire. What these misguided saints did not understand – and Tolkein did – was that their sacrifice made proper memorial greater and more important, not less. The Fellowship suffered their first great loss when Gandalf falls into the abyss. There is no body to bury. The Orcs are close behind, there is no time to grieve properly. It seems as if the loss itself is less damaging than the circumstances which do not allow for proper grief and honor of the dead.

On their next outing, another falls. This time they disregard any remaining danger and take proper care for the body, seeing it laid to rest as best they can. They sing songs over him. It is a funeral that – given their sparse resources – is every bit as large a sacrifice for them as the one seen by so many this week in Westminster.

But why do they take so much time to honor the body, even at the potential cost of their still living comrades? Because we honor the fallen. It is erroneous to say, “Because my brother was not allowed a proper burial I will honor him by also having an improper one.” If we are to retain our humanity, we must say “My brother was not allowed a proper burial in order that I might be allowed one.” This is how we honor the dead. For the Christian, the apotheosis of our care for the body is not our brother’s unwilling example, but our Savior’s willing one. His body was abused in life, but cared for in death. He praised those who did the caring. They are honored and celebrated in the church. Especially honored is the woman who prepared his body while he was still living. Wherever the Gospel is preached in the world, her deed is told as a memorial of her.

The church first honors and then buries her dead. We do so surrounded by the word of God and prayer. But we do it.

The secular and wicked denial of proper burial rites in the late pandemic was an aberration. The church must not be taken in again by such lies. We meet, we grieve, we honor. Cremation for the sake of saving a few dollars is also an aberration. We carry the body God gave him into the church one final time, place the Sword of the Spirit which is the Word of God over the body, and place the weapons of the defeated foe, sin and death, under their feet. We sing the songs of old, then carry him in honor to the place of rest.

It matters not what the world may do to us in this life. It matters less what it may do to our earthly remains after we die. But it matters a great deal what we do for and to our honored dead.